The Loy Yang A power station in Victoria currently generates 30% of Victoria’s power requirements every year. And when forwarder Fracht Sydney and Fracht Nuremberg needed to transport a refurbished Siemens generator from Germany back to Australia, it turned to WW Ocean for help. 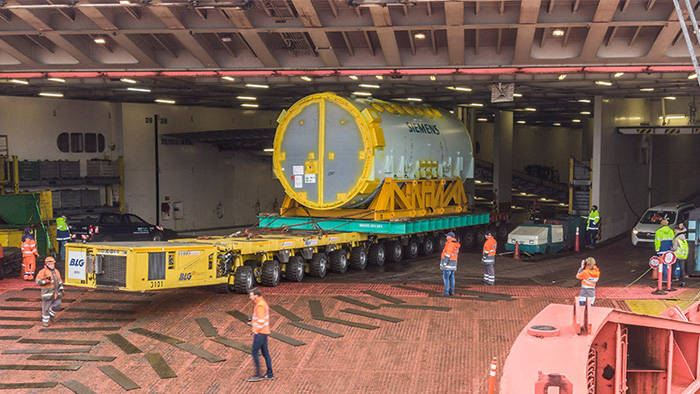 Nestled in the Latrobe Valley and with a capacity of 2,210MW, Loy Yang A power station is a crucial part of Australia's electricity generation system. The brown coal-fired thermal power station, which lies 165 kilometres south-east of Melbourne and was acquired by AGL in 2012, generates approximately 30% of the state of Victoria’s power requirements every year.

In fact, together Loy Yang A and Loy Yang B fuel around 50% of the state’s energy requirements. The power stations and accompanying open cut coal mine cover about 6,000 hectares, with the former producing 30 million tonnes of coal every year.

How can a generator go global?

In order for Loy Yang to remain effective, continual overhaul of generation equipment is crucial – refurbishment which sometimes takes place at manufacturers’ facilities around the world. It’s just such a piece of equipment – a generator, in fact – that recently needed to be transported from Siemens’ factory in Mülheim, Germany to Melbourne.

This isn’t the first time freight forwarder Fracht has shipped generator equipment for a customer – or even the biggest generator it has shipped. In fact, Fracht has previously handled generators and turbines in excess of 350 tonnes for several power stations around the world.

But transporting this particular generator was no mean feat – weighing in at 266 tonnes, it measures almost nine metres in length and more than 4.3 metres in width and height. The Fracht team knew they needed a strong vessel with sufficient capacity – which is why they opted for WW Ocean’s RoRo vessel Talisman with her 380-tonne aft ramp and a deck height of 640 centimetres.

Why a floating crane fit the bill

Lifting the massive generator off the barge that transported it from factory to port required the expertise of WW Solutions, whose Bremerhaven-based team hired a special floating crane for the purpose. The floating crane was tugged for 15 hours from Hamburg to Bremerhaven prior to delivery.

For Fracht, rolling the cargo onto the vessel using blocks and beams and the SPMT meant a reduction in risk. “When planning a shipment like this, we have to deal with a lot of variables,” explains Michel Scheuble, Director of Fracht Sydney. “We need to look at those variables individually, and the effect on the transport concept from a feasibility and risk point of view.”

Fabian Wulferding, sales manager, Germany, WW Ocean, explains that the generator was being shipped to Australia for the second time, having been returned to Germany for refurbishment a year earlier.

Thanks to such shipments, Loy Yang A will continue to deliver power to the grid long into the future. And for WW Ocean and Fracht, there’s the shared satisfaction of knowing that together they’ve played a key role in helping keep the lights on in the homes of Victoria’s 6.4 million citizens.
Back
Organised By