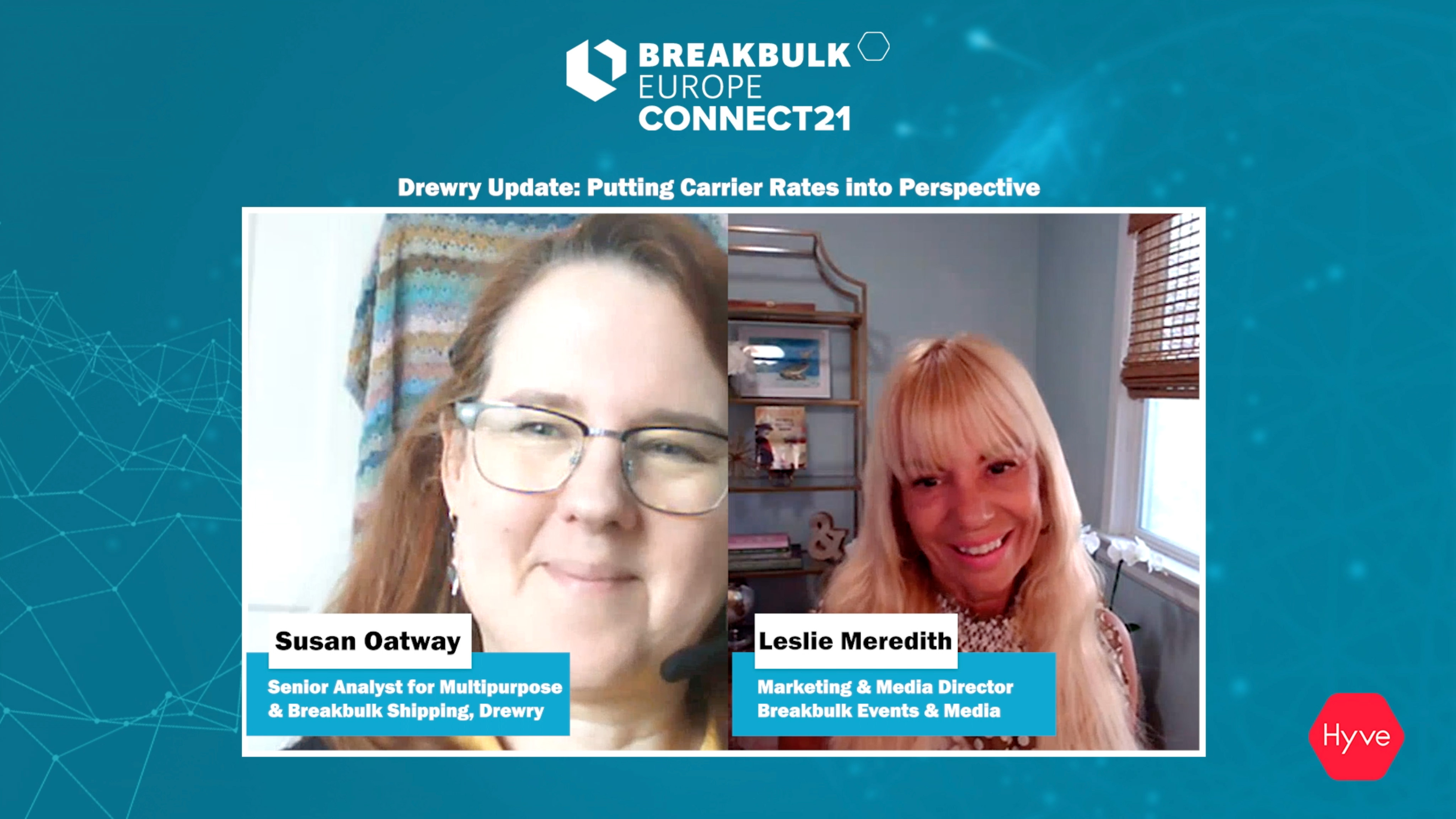 While the multipurpose, heavy-lift and project fleets are beginning to “climb out of one of the longest recessions in this cyclical market,” the potential for longer term carrier profitability remains upbeat but “fragile,” said Susan Oatway, senior analyst, multipurpose and breakbulk shipping for Drewry Shipping Consultants.

Speaking at Breakbulk Europe Connect21, Oatway offered analysis from the Drewry Multipurpose Shipping Market Review and Forecast 1Q21, released in April, and the consultant’s forecast through 2022.
“The market is awash with reports about this meteoric rise, and a significant improvement to owners’ bottom lines,” she said.

Drewry’s MPV Time Charter Index increased to US$7,992 per day in April, a 2.5 percent increase compared with a nearly 15 percent rise the previous month. The index is up 22 percent since the start of 2021 and 35 percent since April 2020. Drewry expects a further 2.6 percent rise in May to reach US$8,200 per day.

Taking a long-term look, “although rates are currently higher than they’ve been for the past six years, they’re still some 40 percent off the peak in 2007,” she said.

Drewry warns that the recovery is “fragile,” driven largely by port congestion in the container and bulk sectors, rather than fundamentals in the multipurpose market.

While underlying demand “wasn’t as bad as we’d been expecting” for 2020, MPV market share is expected to grow 9 percent in 2021, based largely on cargo moving from container and other sectors, impacted by port congestion, to the MPV fleet. The MPV’s sector growth in 2022 is expected to slow to about 3.5 percent “as supply issues sort themselves out,” Oatway said.

Drewry’s forecasts cover upside, baseline and downside scenarios, and even at the downside assessment, demand will continue from 2 percent to 4 percent through 2023. However, that edge could shift from MPVs to container and bulk fleets, just as easily as it shifted to the MPV side in 2020, she noted.

The market has obvious upsides, from the rollout of Covid-19 vaccines, increasing consumer confidence, and the potential for supply chain issues to continue, favoring the MPV sector.

Drewry, on the other hand, sees downsides as more likely, with pandemic setbacks, including in India and South America, weakening confidence and muted economic investment in projects and other cargo demand. Expected infrastructure investment, predicted as a necessary restart for global economies, has yet to materialize because of Covid spikes.

“Until those regions come out of the pandemic, that construction isn’t going to happen,” Oatway said.

True for all shipping sectors, capacity supply and demand is scored as “winner” and “loser” between shippers and carriers.

Within the heavy-lift and multipurpose market, “you’d probably have to say the carriers are winning, because the rates are very good,” she said.

However, this is the first period of significant improvement in the last 10 years, over which time carriers have been scratching to cover operating expenses, in some cases foregoing repairs and maintenance and in worst cases skirting insurance to get by. As such, there has been scant investment in new ships.

“Ultimately the whole sector loses,” Oatway said of the carrier-shipper balance. “If there is no investment in new ships, shippers will not have decent tonnage on which to put their cargoes.”

Given that inability to renew its fleet, the industry faces a pending capacity issue, adding another factor into the fragile recovery, Oatway said.

More than half of the fleet is more than 15 years old, including heavy-lift capable vessels, while “simple MPV tonnage” averages 20 years old. The last burst of shipbuilding in the sector happened between 2007 to 2013, prior to the beginning of the sector’s historic downturn due to impacts from reduced oil demand.

“The fleet is continuing to age and there’s no new tonnage coming in at the bottom,” she said. “At some point we’re going to have an overaged fleet.” She questioned at what point the older tonnage becomes uninsurable for project cargo.

Given the increasing complexities of project cargoes, cargo owners and engineering, procurement and construction firms need modern tonnage, which is becoming in shorter supply.

“That’s an issue more for the shippers than it is for carriers,” she noted. “Carriers that have modern tonnage will be in a much stronger position.”

The current order book is comparable to less than 4 percent of the operating fleet, weighted slightly towards heavy-lift capable tonnage, she said. Meanwhile current demolition candidates largely fall in the smaller, less heavy-lift capable category of the MPV sector, though 2020 was buoyed by scrapping of the last few Rickmers vessels, she said. The total fleet contracted by 1.6 percent in 2020 as newbuilds lagged demolitions.

Investment on the MPV fleet falls squarely on the carriers and their ability to maintain compensatory rates, as the sector hasn’t fostered much optimism from outside investors during its long downturn.

One thing that might renew such optimism is the sustainability push for vessel fuels and more modern, greener vessel designs. “Investors are looking for a way to invest that is more environmentally friendly … so if you’ve got positive green credentials, then you’re much more likely to get that money,” she said.

Carriers’ investment in greener vessels will be helped by the continued growth of renewables projects. Despite the pandemic, the wind market set record levels of new installations in 2020, and offshore wind investment, led by China and Europe, and with the U.S.’s growing potential, is a key project market.

Referencing a recent wind energy report, Oatway related that Paris Agreement targets on reducing global warming and carbon emissions by 2030 saw shortfalls in the first half of the decade, and that may drive significant second-half installations to meet those goals.