At the Rostock and Lubmin sites, Krebs Korrosionsschutz GmbH has been working with the company Liebherr-MCCtec Rostock GmbH for many years. Now, Cometto also contributes to this cooperation.

This is because the Krebs Group relies on the 24 axle lines of the self-propelled Cometto MSPE. The combination is divided into four 6-axle bogies, each with 48 ton axle load per line and two power packs of 202 kW each.

“Cometto vehicles are cutting-edge technology. They also have the advantage that they can,

among other things, be loaded directly into a container. This enables us, for example, to carry

out jobs for another Rostock-based client at their subsidiary in the United Kingdom”, explains Jörg

At the Rostock port, everything that happens is XXL. At the moment, the Liebherr crane HLC

largest offshore crane Liebherr has ever built. In order to lift the crane onto the jack-up rig after

completion, another enormous crane is being developed and built in Rostock, the TCC 78000.

It will be the most powerful rail-bound crane in the world, capable of reaching a load capacity

of up to 1,600 tons. In addition to loading the increasingly large maritime cranes produced

by the company, the new heavy-duty crane will allow other companies to transfer heavy loads at

Cometto is now also involved in all these projects. Using the MSPE, Krebs transported the

362 tons. “The boom was moved on the 24 axle lines of the Cometto self-propelled MSPE in a so-called open assembly, arranged side-by-side. The two vehicle combinations were 60 metres apart”,

reported Jörg Neuhäusel about the combination used for the journey. “The steering was changed from transverse to longitudinal drive specifically for this application and programmed so that the chassis could implement the turns separately and one after the other. This ensured that the load remained exactly in position and that there was no relative movement”, explained Jörg Neuhäusel about this important step in the procedure.

Stroke makes up for height difference

With the help of the Cometto MSPE vehicles, the boom in Lubmin was driven over a ramp onto the barge. “In particular, the large axle compensation in the chassis proved its worth by evening out the height difference between the quayside and the deck”. Upon arrival in Rostock, the barge was offloaded, again using a ramp, onto the property of Liebherr-MCCtec Rostock GmbH. Thanks to

the carousel drive of the self-propelled MSPE, the boom was then rotated 180 degrees into the

correct mounting position for further work. This manoeuvre represented the end of one stage of

this mega-project, in which the self-propelled Cometto proved itself to be a profitable factor. 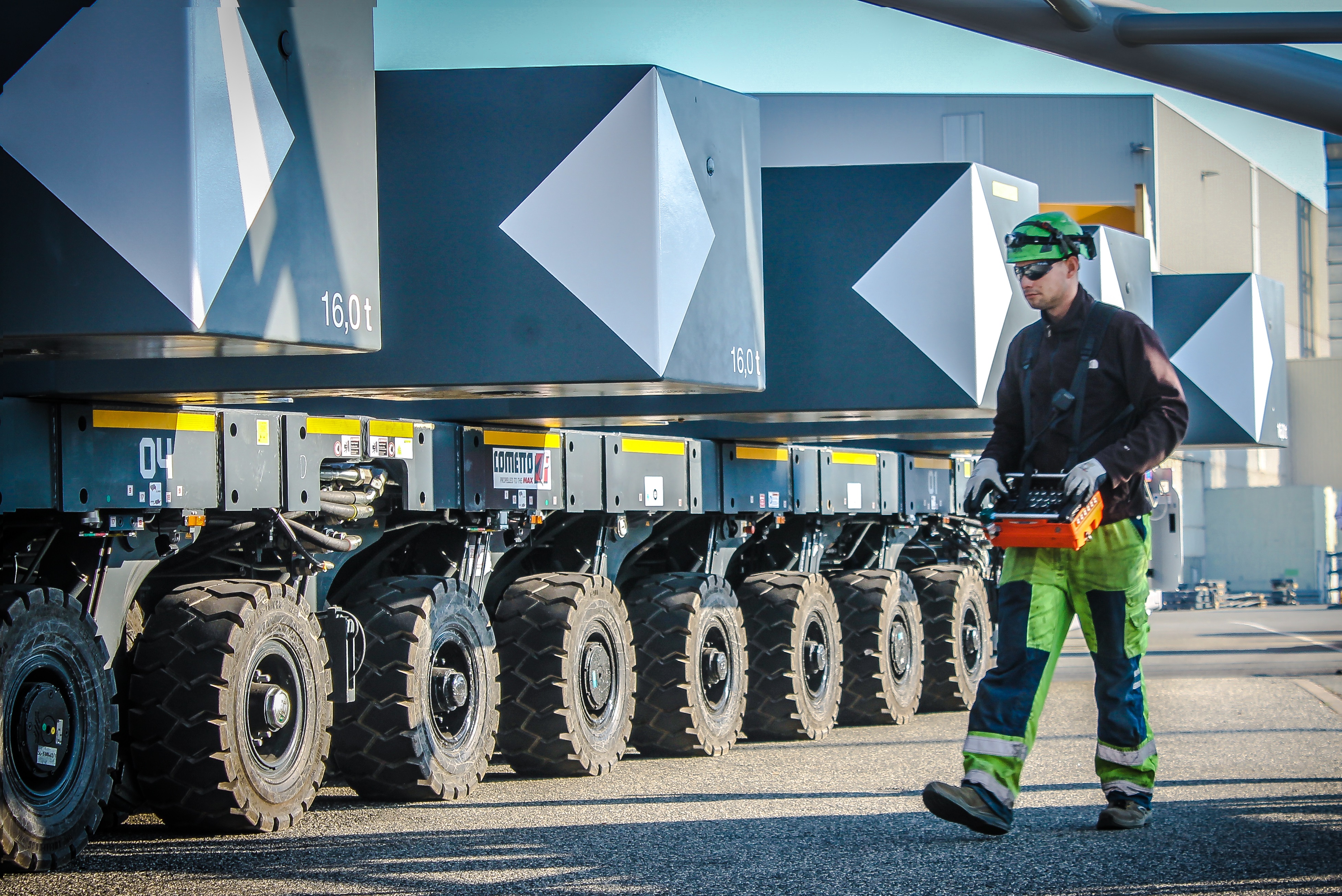